On Friday, March 13, 2020, Los Angeles Unified School District (LAUSD) Superintendent Austin Buetner announced that all LAUSD schools would close as of Monday, March 16, due to the COVID-19 pandemic; in-person instruction would be replaced with online learning for the almost 700,000 students in the district.

Michael Romero, superintendent of Local District South, one of six local districts in LAUSD, wanted to make sure students in his district continued to learn and make progress during this period of online learning. Anticipating the possibility that distance learning might have to continue into the fall, Romero chose to view the situation as an opportunity for teachers to innovate and learn how to implement distance learning effectively.

Distance learning was a new experience for most teachers, staff, students, and families in Local District South, and it was thrust upon them with little notice. Romero pondered how he could energize his teams, ensure a focus on results, and encourage creativity and skill-building during this very challenging time.

Romero reflected on the success the district had had in previous years using DMGroup’s DMBreakthroughTeams approach. Working in teams over a 10-week period, teachers and administrators had successfully achieved measurable results and built leadership and teamwork skills. But that work had been done pre-pandemic. And, almost all of the meetings had been in person, which seemed central to fostering collaboration and cohesion. Could something like this approach be carried out successfully online?

And now it’s how do we scale up. The infrastructure we built with the Breakthrough Results approach can be applied to any challenge a district can have.

What Is the DMBreakthroughTeams Approach?

The core concept of the DMBreakthroughTeams approach is that the most powerful way to develop leaders is for people to learn leadership skills while working to achieve real performance results, rather than just being taught about leadership.

In DMGroup’s work applying this approach to the public education sector, a district or school typically launches multiple teams simultaneously, with each team composed of a cross-functional group of five to seven members. Each breakthrough team sets about identifying a performance goal with specific measurable targets to achieve within a short time frame — usually approximately 10 weeks. The DMBreakthroughTeams approach pushes teams to iterate in rapid cycles. Teams develop innovative strategies, test and track weekly progress, refine their approaches, and continue to iterate with the objective of reaching their goals. Targeted professional development and just-in-time performance coaching support the teams in developing the skills needed to address challenges and overcome obstacles (Exhibit 1).

Although it had never been attempted before, DMGroup believed the DMBreakthroughTeams approach could be delivered virtually. Romero decided it was worth a try, but given that only half the semester was left, a 10-week cycle was not feasible. He and DMGroup agreed to push ahead with six teams from Local District South and see what could be accomplished in just eight weeks.

The results have been extraordinary. Even though the teams never got to meet in person with each other or with their DMGroup coaches and had barely eight weeks to work on their performance challenge instead of the usual ten weeks, five of the six teams achieved their performance goal:

Through their work, the teams unlocked improved approaches to remote instruction and learning, which could be shared more broadly. The DMBreakthroughTeams approach was used at Fremont High School to increase graduation rates (Exhibit 2) and at Banning High School to increase math achievement (Exhibit 3). These teams not only achieved their stated performance objectives but also successfully increased engagement as part of their efforts.

The DMBreakthroughTeams approach empowers teachers and staff to build capacity and encourages them to tap into their hidden reserves of knowledge and ideas to creatively generate solutions, reach peak performance, and establish a new normal. Working together — even though their meetings with each other and with their performance coaches were remote — helped the team feel connected and supported and provided energy and inspiration.

When LAUSD announced in mid-July that fall instruction would be online, the teams that participated in the spring 2020 breakthrough teams felt better equipped to face the fall. Their example is providing encouragement to teachers and staff around them by showing that engaging students and promoting real learning is truly possible during distance learning. 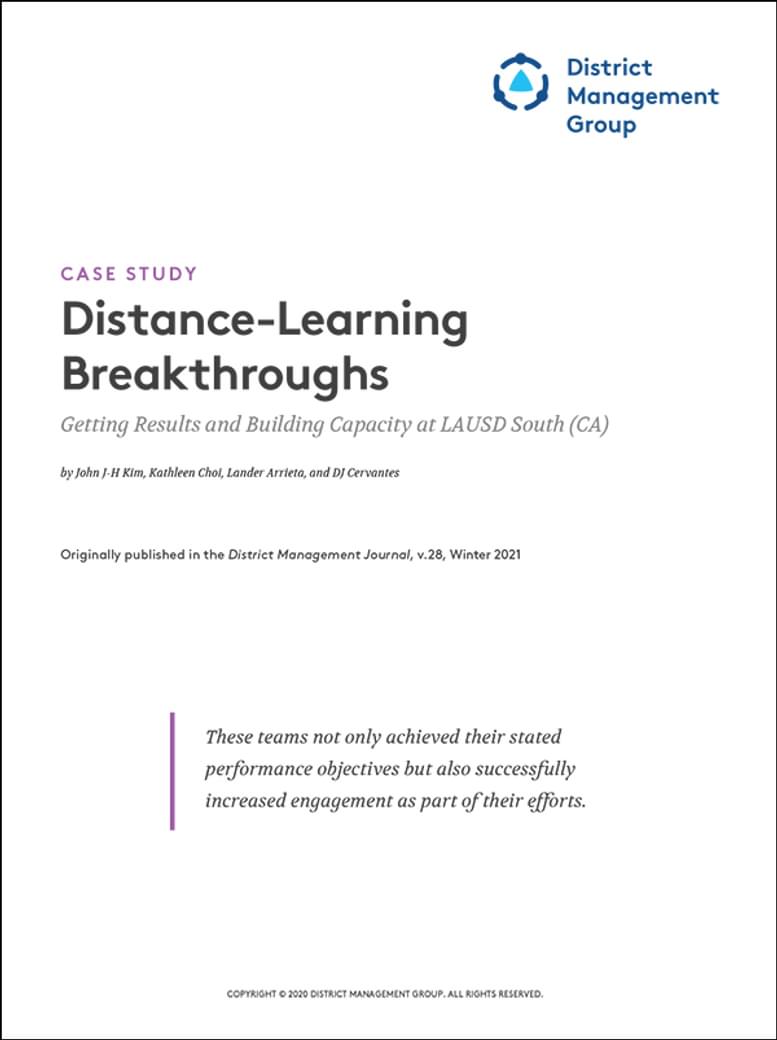 Distance learning was a new experience for most teachers, staff, students, and families in Local District South, and it was thrust upon them with little notice. Romero pondered how he could energize his teams, ensure a focus on results, and encourage creativity and skill building during this very challenging time.